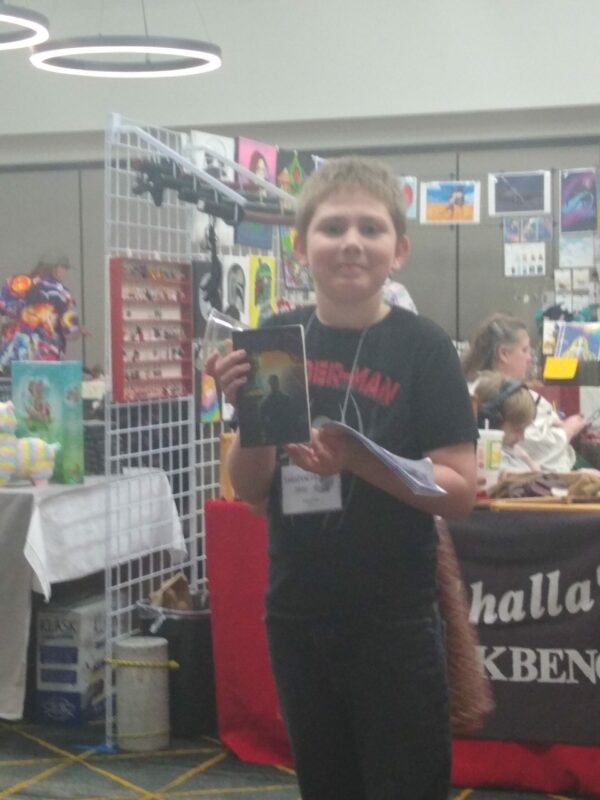 So, I grew up a nerdy kid in a small rural town. Being into magic and dragons and spaceships? That was not a done thing. Not cool. I kept my likes and dislikes as under wraps as I could. I stayed in the closet about my nerdiness as long as I could.

Until I discovered that there were others like me. For me, that happened at summer camp where I met people playing RPGs and Magic. It was an awakening. The moment that you realize that you are not alone. That the fen are out here, and we are a welcoming and loving group that all just want to love speculative fiction together.

Today, I got to be a part of someone else’s awakening, and I am honored to have done so.

That pic is of a kid who was following his Mom around Sagefencon. Now, at our table, we like to ask people what they like to read. This lets us know what book to direct them towards, and also lets us engage.

He said the following: “I like science fiction. And fantasy. Actually, I really want both in one book. Like, dwarves, but they have plasma cannons.”

And so, reaching for a copy of Blackbox Protocol, I thought “I got you, fam.”

Now, I can’t take full credit, here. Blackbox Protocol is set in the Neverwhen RPG universe by Dragondyne Publishing. It’s a place built by the recently-deceased Dustin Gross, and it was built in part because Dustin wanted a world in which dwarves wielded plasma cannons. While I did some work writing on it, primarily in the action scenes, the great Bethany Loy did the bulk of the work on it.

Now this kid stands before me, and instead of saying something patronizing like “Oh, that’s a cool idea,” or “Aren’t you so creative,” or simply ignoring him, I’m able to look this boy in the eye and say “Well, I have a book in which dwarves use plasma cannons.”

And then I saw it.

Before that moment, this kid lived in his own world. After that moment, the world that Dustin created and Bethany brought to life existed to him, and that meant that he was not alone. He is currently running about the con, clutching this book to him like a prized possession.

He has not yet read said book, but that doesn’t matter. It is a talisman. A token. A tangible sign that there is someone else in the universe who thinks the same things are cool as he does. And as such, it is precious beyond measure.

And I can’t help but feel his pure joy myself.